This NABARD-funded study carried out by a team from the MaolKeki Foundation interviewed over 300 farmers, traders and consumers of different types of mushroom in Manipur between September 2019 and January 2020. The interviews were conducted using a defined set of questionnaires in both the valley and hill areas of Manipur. 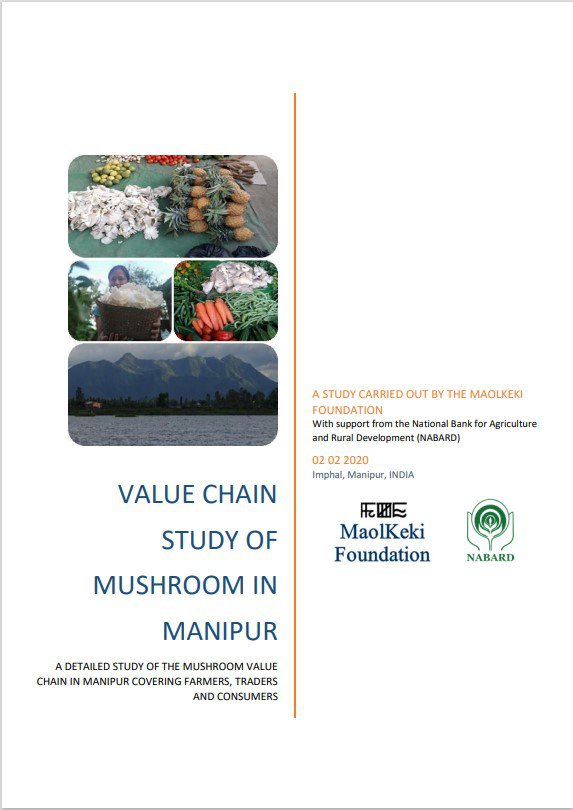 The findings show that mushroom cultivation is a recent phenomenon which has only really taken off in the last three to six years. Most farmers are the educated male youth of Manipur while traders are primarily middle-aged women educated up to primary school level. The farmers also use existing infrastructure and available tools to grow mushroom at a relatively lower cost than a dedicated mushroom facility. Though this saves cost delivering margins ranging from 59% for Oyster and 68% for Paddy Straw farmers, it limits productivity and year-round production capacity with most production coming in after the peak demand had subsided. A farm economic model was created based on an existing farm and it showed that an average farmer needs an upfront investment of Rs2.3 lakhs to establish a new mushroom farm capable of producing 1,000kg of oyster mushroom a year with an IRR of 17% and BCR of 1.01. For Paddy Straw mushroom production, the upfront investment is Rs.3.4 lakhs however the returns are much better though, because of its high perishability, there can be significant losses if not sold as fresh mushroom within a day of harvest. Whilst a lot of farmers received some form of technical training, it was observed that they would benefit from more dedicated, longer term, training programs.

The most widely preferred type is Oyster mushroom which may be because it is relatively easy to grow throughout the year, is moderately priced, and meets the taste preference of consumers. Farmers, traders and consumers trade in mushroom in all kinds of ways and there is no clearly defined flow of mushroom from the farmer to the consumer. Having said that, a lot of farmers do sell directly to consumers. Traders on average make a gross margin of 29%.

Based on the findings of the study, it is recommended that a model mushroom farm be established which can be the Centre of Excellence for all things mushroom in Manipur. It is also recommended that farmers be provided with not just technical but also management training so that they can better run their businesses. The support of mentors is also a crucial gap and a network of mentors must be set up to help farmers. Finally, even if this report has attempted to list the key steps in mushroom production for different types of mushroom, it is important that a Handbook for Mushroom Production in Manipur be developed.